Why Are the World’s Rivers, Canals and Reservoirs Turning to Dust?

Rivers across the globe are disappearing.

From the U.S. to Italy to China, waters have receded, leaving nothing but barren banks of silt and oozing, muddied sand. Canals are empty. Reservoirs have turned to dust.

The world is fully in the grip of accelerating climate change, and it has a profound economic impact. Losing waterways means a serious risk to shipping routes, agriculture, energy supplies — even drinking water.

Rivers that have been critical to commerce for centuries are now shriveled, threatening the global movement of chemicals, fuel, food and other commodities.

Europe’s Drought May Be Worst in 500 Years: Report

The Rhine — a pillar of the German, Dutch and Swiss economies — has been virtually impassable at times in recent weeks. The Danube, which winds its way 1,800 miles (roughly 2,900 kilometers) through central Europe to the Black Sea, is gummed up too. Trade on Europe’s rivers and canals contribute about $80 billion to the region’s economy just as a mode of transport.

In China, an extreme summer has taken a toll on Asia’s longest river, the Yangtze. Diminished water levels have hobbled electricity generation at many key hydropower plants. Mega cities including Shanghai are turning off lights to curb power use, and Tesla Inc. has warned of disruptions in the supply chain for its local plant. Toyota Motor Corp. and Contemporary Amperex Technology Co., the world’s top maker of batteries for electric vehicles, have shuttered factories.

Drought plaguing the Colorado River — a source of water for 40 million people between Denver and Los Angeles — has gotten so extreme that a second round of drastic water cuts are hitting Arizona, Nevada, and Mexico. The river and its tributaries irrigate about 4.5 million acres of land, generating about $1.4 trillion a year in agricultural and economic benefits.

The retreating waters of the U.S. Southwest are exposing dead bodies and dinosaur footprints that had been submerged for perhaps millions of years.

Why Are Rivers Shrinking?

The reasons global waterways have dried to a trickle are complex. There’s the impact of the weather-roiling La Niña, prolonged drought in many regions and also simple bad luck. But the biggest driver underpinning the shift is climate change.

“It’s a combination of many factors leading to this particularly extreme event,” said Daniel Swain, a climatologist at the University of California Los Angeles. “But there is clearly a role for climate change, which made multiple underlying, record-breaking, and in some cases, record-shattering heat waves dramatically more likely.”

Europe’s Record-Breaking Summer Heat Wave Will Be the Norm by 2035: Report

The Earth’s rising temperatures have meant mountain ranges are getting less snow, leaving less water to flow down to streams in summer during the melt, said Isla Simpson, a scientist at the National Center for Atmospheric Research in Boulder, Colorado.

Mountain snow is nature’s reservoir. When snowfalls dwindle, the source of many rivers — from the U.S. to China to Europe to the Middle East— vanishes, said Swain of UCLA.

“The loss of snow and mountain glaciers in the Alps has been extraordinary this summer as well, shocking even seasoned climatologists and glaciologists,” Swain said.

Then there is La Niña, a cooling of the equatorial Pacific Ocean that upsets global weather patterns, bringing heavy rains to some areas and drought to others. The world is in its second straight La Niña, and the odds are rising 2023 will see another one.

The world’s hotter temperatures also mean that waterways are literally evaporating away.

Or as Seager puts it, the warming atmosphere “is sucking more moisture from the land surface.” 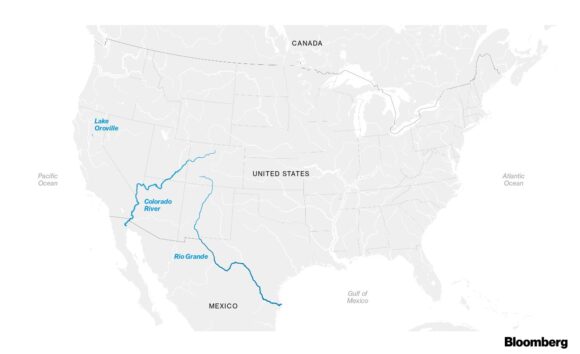 –With assistance from Kim Chipman and Samuel Dodge.

Top photograph: Park visitors observe the bleached “bathtub ring” that is visible on the banks of Lake Mead near the Hoover Dam in Arizona, on Aug. 19, 2022. Photo credit: Justin Sullivan/Getty Images Swiss Re examines the key to building trust Professional liability market is “a game of whack-a-mole now”