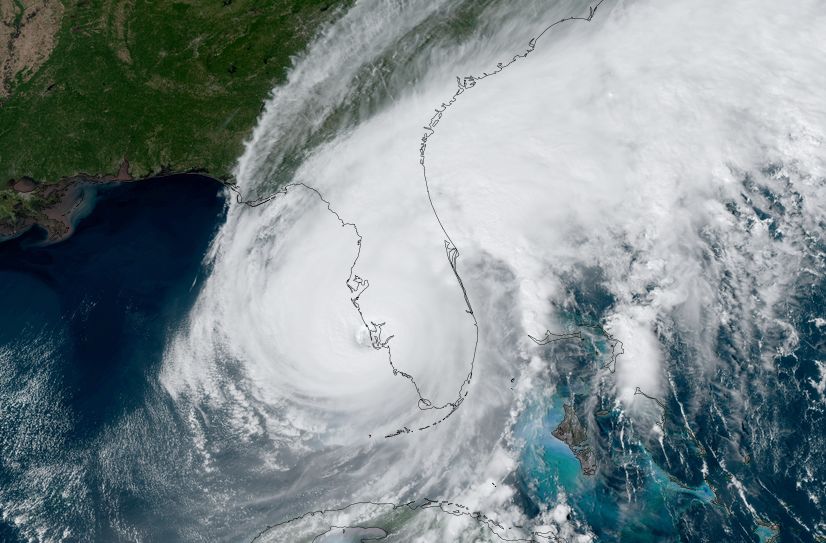 Ian was downgraded to a tropical storm as it continued to move northeastward across central Florida, with a massive and deadly surge of water and catastrophic winds that are poised to make it one of the costliest storms in US history.

The storm hurricane made landfall west of Fort Myers near Cayo Costa shortly after 3 p.m. Wednesday local time as a Category 4 hurricane. Nearly all of Florida, home to 21 million people, braced for widespread blackouts and floods. More than 2 million people have been ordered or urged to flee. The storm is expected to cause more than $67 billion in damages and losses and global shipping is already diverting from its path.

“This is going to be a tragic event,” Florida Governor Ron DeSantis said Wednesday as the storm neared shore. “It’s something that is going to be there for days, weeks, months and unfortunately in some circumstances even years.”

A storm of this magnitude is a severe test for Florida’s infrastructure due to its low-lying and densely populated coastal areas that are prone to flooding. It comes as climate change has fueled extreme weather worldwide this year, including deadly flooding in Kentucky and Pakistan, a European heat wave that killed more than 2,000 people in Portugal and Spain, and relentless drought in the US west.

Ian was downgraded to a tropical storm with maximum sustained winds of 65 mph, according to the latest advisory from the National Hurricane Center. Accordingly, hurricane warnings along the east and west coasts of Florida were downgraded to tropical storm warnings. The storm was about 40 miles (70 kilometers) southeast of Orlando, the National Hurricane Center said. Ian will approach the coast of South Carolina on Friday, then move inland again.

The storm was about 55 miles (89 kilometers) south-southeast of Orlando at 2 a.m. and was forecast to move across central Florida and then emerge over the Atlantic Ocean later Thursday. Winds were about 75 mph, down from a peak of 150 mph earlier. About 2.3 million homes and business are without power, according to PowerOutage.us.

Ian’s wind speeds fell to 90 mph at 11 p.m., meaning it’s now a Category 1 on the Saffir-Simpson scale, according to the National Hurricane Center.

More than 2 million homes and businesses were without power in Florida late Wednesday even as Hurricane Ian’s winds continued to calm, according to PowerOutage.us.

The storm, now a Category 2 hurricane on the Saffir-Simpson scale, was about 80 miles south of Orlando at 10 p.m. local time. The winds had weakened to 100 mph from a peak of 150 earlier, according to the National Hurricane Center.

Global shipping has diverted away from the storm’s path through Florida and into the Atlantic before curling into Savannah, Georgia — the third busiest US container hub. More than 173 super yachts were moored in Florida as the storm hit, mostly along the Gold Coast from Miami to Palm Beach County.

Tornado watches have been issued in East Central Florida until 1 a.m. ET as Ian rips through the region.

“You should make the same preparations as if it is a tornado going over your house,” said Kevin Guthrie, director of the Florida Division of Emergency Management, during a Wednesday briefing. “Get into an interior room free of windows and have stuff to be able to protect your head and body from debris such as a blanket, mattress or even a helmet.”

The US Coast Guard said it’s searching for 23 missing migrants near the southern tip of the Florida Keys after their boat sank while Hurricane Ian hammered the Gulf Coast.

In a series of tweets, the US Coast Guard said at least four Cuban migrants were able to swim to shore near Stock Island — just north of Key West — after their boat sank “due to inclement weather.”

Cuban migration to the US has hit a decade-long highs as the communist island is mired in economic turmoil and power outages.

Ian churned across Western Cuba Tuesday, knocking out power to the entire island before making its way to Florida.

Read More: Cuban Exodus to the US Hits Record, Topping Crisis of 1980

Hurricane Ian came ashore tying the record as the fifth strongest to ever make landfall on the mainland US, Bob Henson and Jeff Masters, meteorologists for Yale Climate Connection wrote.

It was also tied as the fourth strongest winds to hit Florida, as it came ashore with 150 mile per hour winds on Cayo Costa, a small island west of Fort Myers, Phil Klotzbach, a hurricane researcher at Colorado State University, tweeted. The strongest was the Labor Day 1935 storm that had winds of 185 mph at landfall. Ian tied with the 1919 Florida Keys storm and Hurricane Charley, which hit the same area in 2004.

Ian will likely do much more damage than Charley however because it is a much larger storm, said Daniel Swain, a climatologist at the University of California, Los Angeles, in a tweet.

Only four storms have hit the US mainland with winds stronger than Ian since modern record keeping began in 1851.

The are the Labor Day Hurricane of 1935, Camille in 1969, Andrew in 1992 and Michael, which struck the Florida Panhandle in 2018, according to Phil Klotzbach, a hurricane researcher at Colorado State University.

Andrew and Michael were among the 10 costliest in US history, according to the National Centers for Environmental Information.

Ian is threatening to further upend Florida’s already unstable home-insurance market. The largest insurers reduced their presence in the state to dodge losses brought on by Atlantic hurricanes, and the smaller underwriters still active there have been forced to hike premiums and narrow coverage to keep pace with litigation and fraud. So far this year, six insurers that write policies in the Sunshine State have been declared insolvent, and a major storm could stretch the finances of the companies still standing.

Insurers not out of the woods on COVID BI “brushfires”