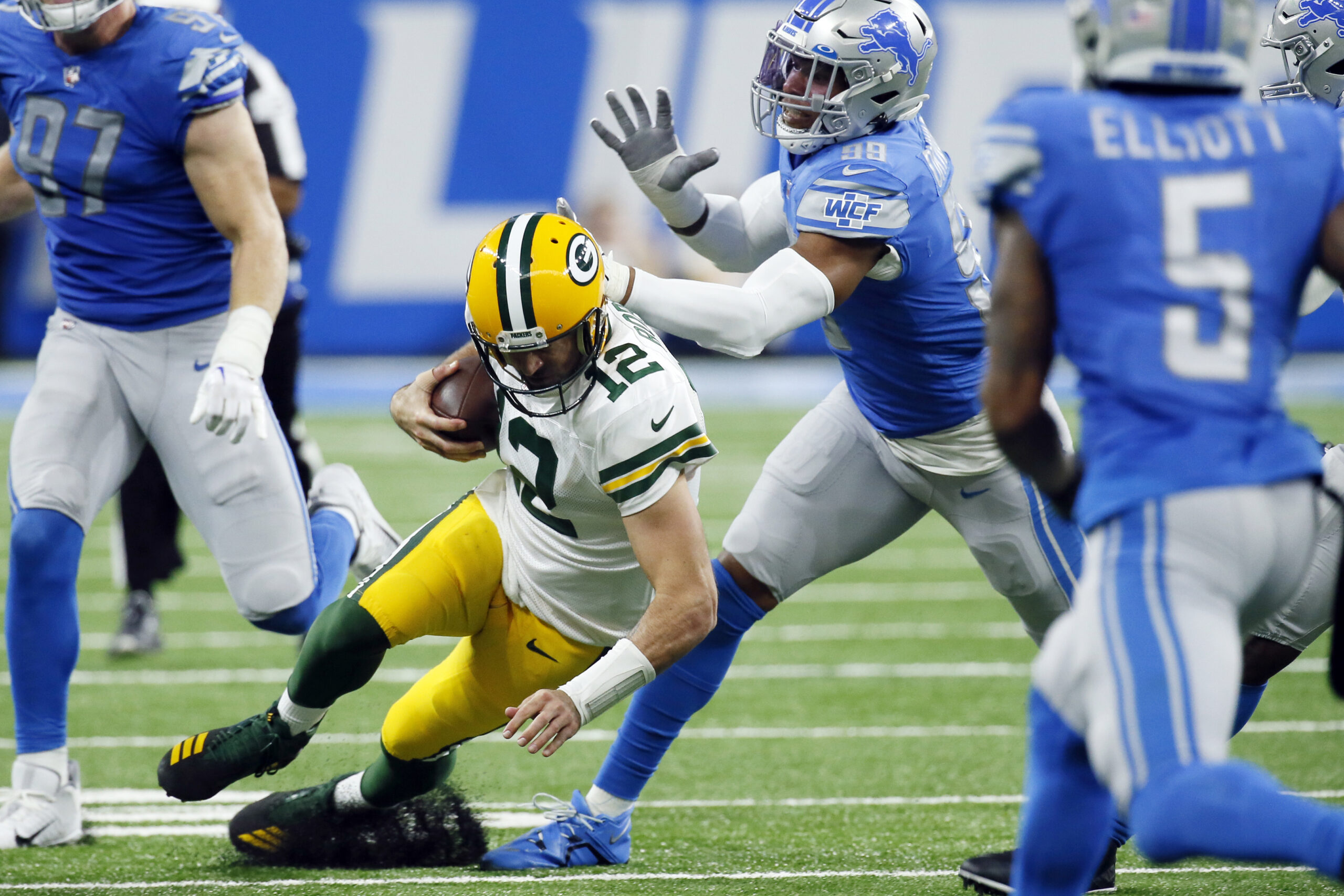 Aaron Rodgers has hit the ground in every NFL stadium except one. And while the “frozen tundra” of Lambeau Field has delivered its share of bumps and bruises, the venues with artificial turf have been even rougher on Rodgers’ nearly 39-year-old body.

“I do think it’s time to go all grass throughout the league,” the four-time MVP said Tuesday, echoing a growing sentiment that’s become a major talking point around the NFL.

Players from Seattle to Miami, from New England to Los Angeles, have loudly backed Tretter. Rodgers, Green Bay’s 10-time Pro Bowl quarterback who has played in every stadium except Las Vegas, thinks there’s a way for the league to pivot to grass quickly.

“A lot of money in this league,” he said. “It’s about cost. I don’t know how much that would cost. … But the league’s been doing pretty well.”

Does Rodgers think it will get done?

“No, honestly,” he said. “I don’t have a lot of confidence when it comes to the league making that decision without some sort of big vote and gripes from certain owners who don’t want to spend the money. … This would be putting your money where your mouth is if player safety is important.”

The NFL hasn’t acknowledged a need for new sod. Jeff Miller, the executive vice president of communications, public affairs & policy for the NFL, said in a statement Saturday that injury rates are approximately the same on grass and turf.

The data provided by the league did not distinguish between the three types of turf used: monofilament, dual fiber and slit film. Tretter specifically took exception with the slit-film surfaces used in Cincinnati, Detroit, Indianapolis, Minnesota, New Orleans and New York.

Players parroted Tretter’s plea, and even a few coaches have joined the push.

“I prefer natural grass,” Kansas City Chiefs coach Andy Reid said. “I’ve listened to all the studies, density studies, I’ve seen all the different compounds they’ve put in there. I still like grass.”

Most players do, too.

“You kind of feel the difference when you’re running,” Minnesota Vikings running back Dalvin Cook said. “If we can fix it, let’s fix it. Let’s get the safest atmosphere for us to go play in.”

Added Detroit receiver Amon-Ra St. Brown: “I do prefer playing on grass. It’s more forgiving, more natural, and it just feel it’s better. It feels better on my joints, my ankles and whatnot.”

“Guys get terrible injuries from that stuff,” Tremble said. “I get the usability of it, but this is a billion-dollar business, and I think where we should put the money into should be for the players because if we got grass fields and can keep playing, the money keeps rolling in. You see star guys go down all of the time because of it.”

The Panthers already have urged owner David Tepper to switch to grass in the offseason. Sure, it costs more in the long run, but technology advancements have made grass fields more tolerant to every condition seen in the NFL: heat, cold, humidity and dryness. Two indoor venues – in Arizona and Las Vegas – have grass fields that can be rolled into the sun.

Fourteen of the NFL’s 30 venues still use a version of synthetic turf. The Hellas Matrix Turf used in Dallas, Houston and Los Angeles is widely considered the best. It’s created using a textured and twisted monofilament fiber.

Slit film, meanwhile, has sliced strands that form a honeycomb shape. It holds up well to frequent use, but the concern is whether cleats are getting caught in the honeycombs.

“They don’t have a bad field in this league, but there are better fields,” New York Giants safety Julian Love said. “There is a type of turf that has proven to be better. We happen to play on the lowest turf in the league, so you want to see those standards go up.”

Switching from artificial turf to grass would be expensive, as Rodgers suggested. It would cost roughly $500,000 for demolition, new rock underlayment and irrigation (drainage could be reused) and another $350,000 for lay-and-play sod. Cold-weather teams, including those playing indoors, would be lucky if the new grass lasted a month before needing to be resodded.

A potential compromise would be placing thick-cut sod on top of the fake stuff and swapping it out a few times over the course of a football season.

Any tweak would be a welcome relief for most players.

“I do know that after having surgery, and when I go out there and play on turf fields, it’s different,” Cincinnati Bengals nose tackle D.J. Reader said. “It’s a lot more pounding. I get a lot more achy after games.”

Thomas, coincidentally, now plays for the Jets. He was among the many calling for immediate change.

“No one knows the beating that our bodies take on turf more than us – the players,” Thomas posted on Twitter. “The sport is violent enough. We shouldn’t be taking more damage from the field, too.”

All those 49ers injuries prompted a review involving representatives from the NFL, NFLPA, MetLife Stadium, the Jets, the Giants, the turf maker and an independent field inspector. They concluded that the field met all applicable standards and protocols for NFL surfaces.

Two years later, Tretter – now with players like Rodgers standing behind him – insists the standards need to be raised.

“As players, we have a simple message for the league: stop with the lip service, stop with the media spin, stop pretending you care,” he said. “And if you actually do care, take the actionable steps to fix the problems our union has identified, especially those issues you actually agree with.”