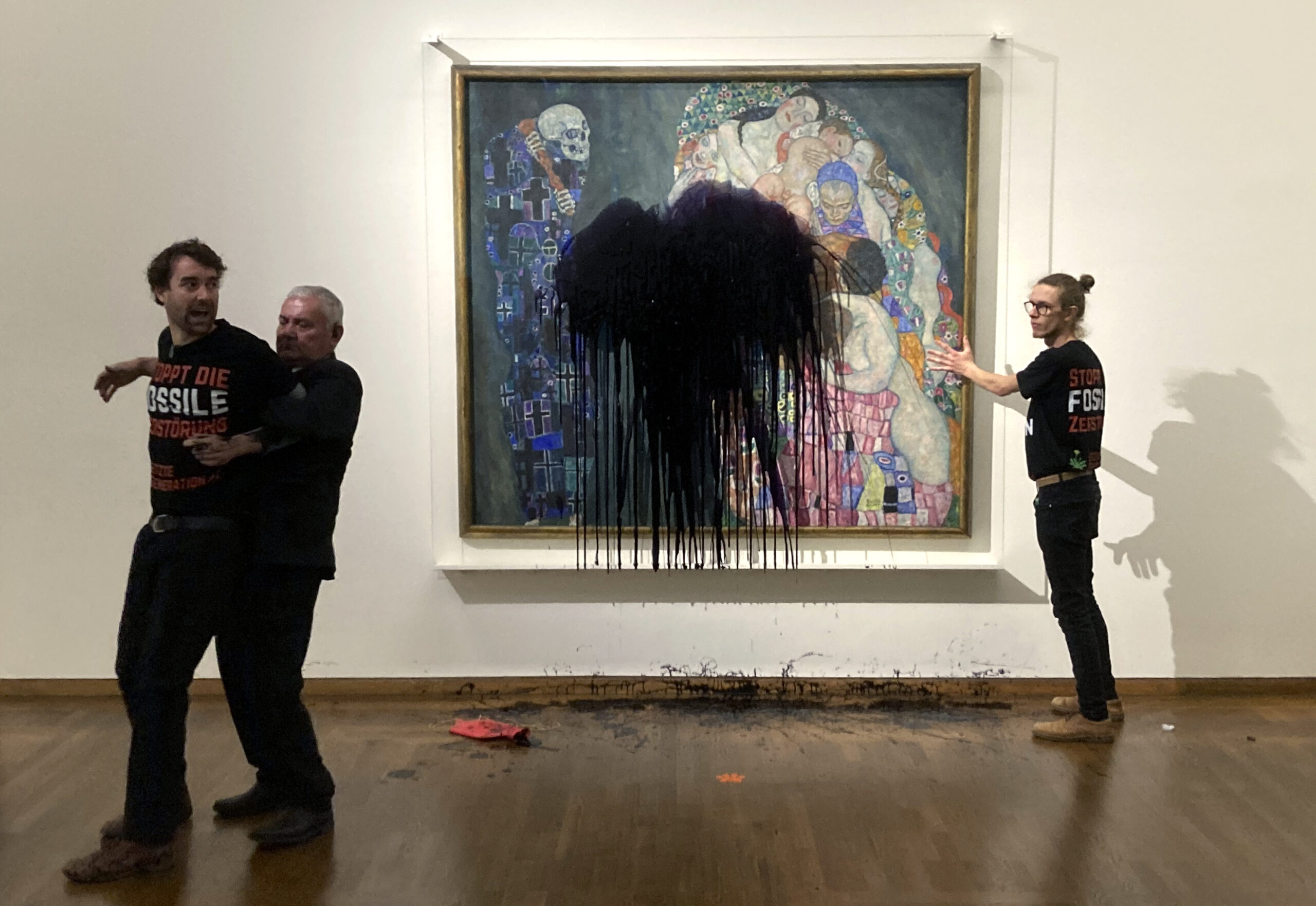 Climate activists’ attacks on some of the world’s most precious paintings have added to insurers’ worries about the threat to art from climate change itself, concerns seen as leading to higher art insurance premiums.

In recent weeks, activists have drawn attention to the climate cause by throwing tomato soup at Vincent van Gogh’s “Sunflowers” in the National Gallery in London and a black liquid at Gustav Klimt’s “Death and Life” in the Leopold Museum in Vienna to protest against the use of fossil fuels.

The paintings were behind glass or a screen and a spokesperson for the National Gallery said only “minor damage” was done to the Sunflowers’ frame.

The Leopold Museum has said the Klimt was not damaged but did not respond to a request for further comment.

Many in the art and insurance world, however, say it may be only be a matter of time before art works are vandalized, especially if protests spread beyond climate activism.

Almost 100 galleries, including New York’s Guggenheim and the Paris Louvre, earlier this month issued a statement saying the activists “severely underestimate the fragility of these irreplaceable objects.”

“At the moment it’s just climate change activists, who are mainly middle-class liberals and are not really intending to damage the work,” said Robert Read, head of art and private client at insurer Hiscox.

“What we worry about is if it spreads to other protest groups who are less genteel and will take a less caring attitude.”

Even if the art itself is not directly damaged, the clean-up costs of repairing a frame and remounting a picture can reach tens of thousands of dollars, said Filippo Guerrini Maraldi, head of fine art at broker Howden.

“The risk profile has changed now. The insurers might say ‘I want a little bit more money next year’ and ‘what are you doing about security?’” Maraldi said, adding that art owners were becoming more nervous too.

“We’ve already had several requests from clients that may have pieces in museums, requesting that they are stowed away.”

The art insurance market globally earns around $750 million in premiums. Premium rates rose by around 5% in 2020 and 2021 and remained steady this year but insurers expect them to rise.

Regardless of the climate protests, the increased incidence of fire and flood linked to global warming that has inspired activism is likely to drive insurance premiums higher next year, insurers and brokers said.

Jennifer Schipf, global chief underwriting officer for fine art & specie at AXA XL said she expects reinsurers – who insure the insurers – to raise rates during the Jan. 1 renewal period, which could impact the art market.

So far the attacks have not led to claims, insurers and brokers say. It was unclear what the Leopold Museum’s arrangements were, but the British government bears the risks for the National Gallery’s permanent collections, a gallery spokesperson said.

Major museums often rely on governments to provide financial security in the event of damage rather than seeking commercial insurance.

Commercial museums and galleries, however, buy art insurance, and its use is also more prevalent among larger museums in the United States than in Europe.

The premiums they pay have remained steady in part because more general concerns about terror attacks and violence had already tightened security in recent years, with more works behind glass, and increased numbers of security guards and bag searches.

In some cases, commercial insurers have also grown more wary, with one insurer who declined to be named saying it only insured artworks that were behind glass.

While five insurers contacted by Reuters said they were not yet factoring climate attacks into premiums, some artists say they already face increased costs.

Thomas Hampel, agent for the German artist ANTOINETTE, said the insurance premiums to cover her art were set to rise 12.5% next year, compared with 3%-5% rises in the previous three years.

In addition, the extra expense to exhibit a large artwork safely would be 35,000 euros ($36,417) for a 100 square meter of anti-reflective glass, on top of transport and assembly.

The attacks may also eat into government indemnity – the state insurance that covers major galleries when they are showing art they do not own, Adam Prideaux, managing director of art insurance broker Hallett Independent, said.

Arts Council England, which provides such indemnity, said in emailed comments it could not give any details of individual claims, but said “only a small number of mostly minor claims have been made in the last ten years.”

(Reporting by Carolyn Cohn and Barbara Lewis in London and Noor Zainab Hussain in Bengaluru; additional reporting by Crispian Balmer in Rome; editing by Elaine Hardcastle)

Photograph: Austrian activists of “last generation Austria” have splashed a Gustav Klimt painting with oil in the Leopold museum in Vienna, Austria, Tuesday, Nov.15, 2022. The painting is behind a glass cover and was unharmed. Photo credit: AP Photo/Letzte Generation Oesterreich.

How can brokers help clients who face long-tail pollution liabilities?